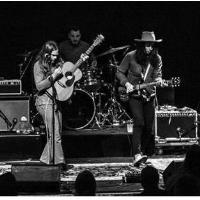 The Coffis Brothers, a band with an American roots-rock sound, headlines at the Langlois Cheese Factory on Friday, May 13. The evening of music, presented by Small n Dull Productions, will open with local band Blue Ramble. Music starts at 6:30 p.m. Tickets are available at the door and are $20 per person. Children 17 and under are admitted for free.

California-based Coffis Brothers is fronted by siblings Jamie and Kellen Coffis, who were steeped in music-making from a young age thanks to their music-teacher mom who taught them the importance of melody, mood, and message in songwriting and performance.

In 2011, The Coffis Brothers released their debut album, The Coffis Brothers & the Mountain Men, and introduced audiences in Northern California to their mix of new and nostalgic tunes. Follow-up albums like Wrong Side of the Road, Roll With It, and In the Cuts (produced by Mother Hips co-founder Tim Bluhm), along with the talents of lead guitarist Kyle Poppen, bassist Aidan Collins, and drummer Cory Graves, solidified the band’s sound and musical reputation. Santa Cruz Weekly wrote, “The Coffis Brothers mix a blend of folk, country and rock with the intensity of personal lyrics into a gritty and often tender harmony of sound.”

The Brothers’ latest album, Turn My Radio Up, released in April, is full of songs that blend woodsy imagery from their native California with universal stories about love, loss, and the open road.

The concert location, the Langlois Cheese Factory, is just off the west side of Highway 101 at 94179 Allen Boice Drive in Langlois. Historically, the building was used for cheesemaking, but these days it is a venue for concerts, events, and private celebrations.